There is a fairly steep learning curve on 3D printing. I spent the first day or two in a fog where I just pushed buttons and didn’t really know what was going to happen but that’s what hacking is all about, right?

Since I would have found this helpful, I’ll just give some tips that I’ve learned so far. Keep in mind that these are tips from a guy who’s been printing for just 24 hours.

Just think, in no time, you’ll have sloppy prints just like me:

I spent the last couple of months building an Ultimaker 3D printer. Ok, I didn’t actually spend three months building it but it took me three months.  The build process was daunting because I wasn’t sure what I was building. If you draw up some plans for a bunk bed and then proceed to build it then you kind of know what’s happening at every step. When you get a big kit and are following directions you aren’t always sure why you are doing something. 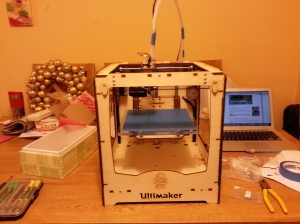 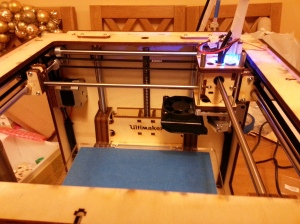 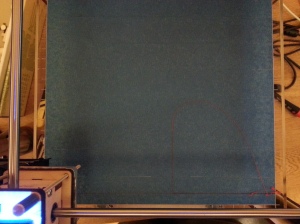 As you can see my bed levelling went a bit wonky. Those are supposed to be squares. The y-axis was working well but the x-axis wasn’t and seemed to cause movement in the y-axis instead. After untangling my wires because I thought I had crosstalk I realised that I hadn’t properly tightened the pulleys on the actual stepper motors. A twist of the screwdriver and things became much better.

I find this all rather exciting and daunting at the same time. I’ve been stuck in the land of digital for so long that worrying about crosstalk, friction and belt tensions is slightly bewildering. I’d recommend it to any developer!